Watch the full statement from @POTUS on the attacks in Paris. https://t.co/yQThOvrdxZ
— The White House (@WhiteHouse) 13 Novembre 2015

At least 18 people have been killed in Paris after multiple explosions and shootings at different locations through the French capital, according to reports. Hostages have also been taken at the Bataclan concert hall, police told Agence France-Presse. Two people opened fire at the Le Carillon bar, while another shot up the Cambodge restaurant in the city’s 10th district, according to French mediacited by the BBC. 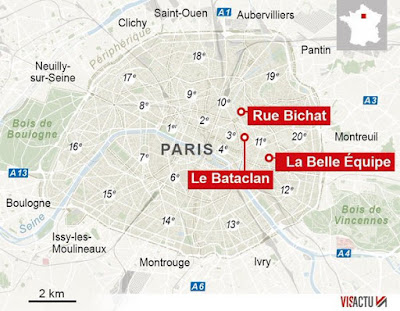 BREAKING: witnesses describe panic in central #paris as it appears gunmen are on a shooting spree in various areas of the French capital.
— Tom Burges Watson (@Tburgeswatson) 13 Novembre 2015

Several people have been killed and seven others injured in a shooting in central Paris, a CNN affiliate reports https://t.co/0DVxATng1G
— CNN (@CNN) 13 Novembre 2015